Arrest Made in The Jonbenet Ramsey Murder Case 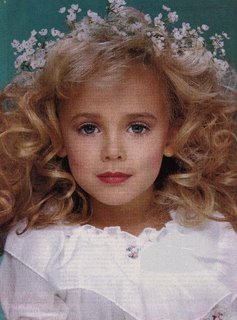 The small Boulder, Colorado Police Department was just not up to the task of this tragic murder investigation. The December 26, 1996 killing has remained unsolved and gone cold. Aside from the murder three additional people were destroyed too. Jonbenet’s parents and brother suffered untold abuse, scorn, hatred and humiliation.

Patsy Ramsey died this year from cancer, but my guess is a broken heart was the real malady that took her life. A Ramsey family spokesperson has told of an arrest in this case. So far Boulder police have remained mum on this story.

One thing for sure putting together a credible and sucessful murder prosecution now will be a real challange.

Update: The Boulder County District Attorney’s office has confirmed that a suspect that has implicated himself was found in Thailand and their investigators have traveled there to interview him. So far they’ve declined to name the suspect who is in custody on unrelated sex charges. Extradition procedures must be made and you can bet that photographers will be waiting to snap his picture in connection with his court appearances.

Additional information: I could find no history of Karr living in Colorado, however there is a time when Jonbenet lived near Atlanta at the same time Karr did. Karr has a Wife listed as Lara M. Karr who resided with him in Alabama and Petaluma, CA. Karr is not listed as a “registered” sex offender in any public list within any state of the United States.

I'm starting to have serious doubts that John Karr is really involved with the murder of John Benet Ramsey. I think I'd confess to setting the Chicago Fire if I thought that would get me out of some Thai jail.

How tragic. And a school teacher at that. I hope they fry his ass.

btw: congrats on the acting gig.

I doubt this is the real killer. He is trying to dodge hard jail time in Thailand, what better way to escape than to confess to this one? Also, his ex-wife says it is geographically impossible for him to be involved in this murder.