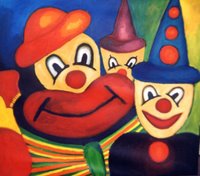 Political correctness and ethnic sensitivities protects nobody from terrorists.

We are at war. The only threat comes from those we are at war with. Our enemies are Arab Muslims. To deal with this very real threat they sent in the clowns when we needed the cops.

We train the inflexible TSA clowns to disregard reality to make sure every airline passenger suffers the terrorist treatment not just the usual suspects. We allow the TSA clowns to waste time, effort and money as they treat Americans like the enemy terrorists. We just don’t have our eyes on the ball here.

The only effective security we can maintain is through profiling by professional, trained and equipped law enforcement officers. The non-law enforcement, TSA clowns we hired will never be up to the task.

Additionally we must allow trained and sworn police officers to travel with their firearms. We should encourage them with free flights or flights and greatly reduced fares.

We have never put in place an armed gauntlet of cops to deal with any group of armed terrorists that dare invade our airports. What we have in place could never stop a group of 12 well-trained and armed men on a suicide mission.

We are too busy frisking our fellow Americans to deal with the real threat from Arab Muslims.

Two of the arrested terrorist in Britian were NOT arabs. They were caucasion Brits that had converted to Muslims. You forget they can recruit those of our own race as 'none are more devout than the coverted!'

I'm not a PC fan, but I understand they will try using people that are not arab looking.

Caucasian or African-American looking passengers would still meet the profile by age and demeanor for a closer look by the cops.

There are lots of gaping holes in the airline security that the TSA could never plug. The cops would at least have a fighting chance