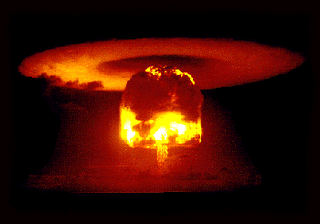 I’m old enough to remember the panic of the Cuban Missile Crisis. People were praying in public. My fellow students at Chicago’s Senn High School in Chicago were expecting the big one any second. Those were dark days indeed.

Today we have Israel at war again. The bad news is that it’s not with the technology used in the Six Day War 39 years ago but what they have developed since with the additional help of imprisoned spy Jonathan Pollard.

These days, a suicidal Muslim madman runs Iran. Iran is a country loaded with an endless supply of nut jobs just like their leader. Add enough tribal splinter groups in the other Arab countries to this mix and dropping the big one becomes the only option for Israel if they really have one to drop. Americans who are unable to escape that part of the world face horrible danger.

I can’t help but envision the Arab world exterminating every Jew they can reach. As a nation we will involve ourselves to the max. North Korea, China and God knows who else can be counted on to get involved too.

I can’t even imagine a ceasefire now. I’m I being a pessimist? Someone please tell me I’m somehow wrong and why.

In the meantime stockpile food, water and fuel. Get ready to put on your helmet and jump into the bunkers.
Posted by Paul Huebl Crimefile News at 7/14/2006 06:03:00 PM

I don't think you're a pessimist. In fact I was having a conversation with some others about an hour ago stating the same sentiments. I think you're pretty close to dead on.

Ceasefire? Are these people nuts? Screw the ceasefire, lets finish the job now while we got the chance. These Islamic terrorists will never be happy until every Jew and American is dead, Israel and America do not exist and all of Europe is Islamic. To deny that is to admit that you live in lala land. Thats the goal, thats what they want. An Islamic world. I say while Israel is doing Lebanon and we are doing Iraq, we should be formulating plans to make the rest of the world safer by going after Syria and Iran.

One more thing. If the terrorists launch missles into Tel Aviv, the Jews will use nukes in retaliation, as they should.

It's the beginning of the battle mentioned in the Old Testement book of Ezekiel 38-39.