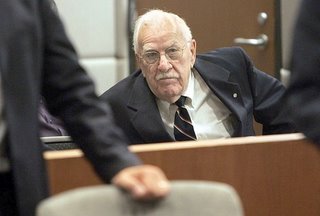 It will be three years on July 16th since 10 people were killed and 63 were maimed as Santa Monica octogenarian, George Russell Weller’s car crashed into the popular and crowded Farmer’s Market.

Weller now 89 years old is a facing a September felony trial for 10 criminal counts of vehicular manslaughter in connection with the carnage. Authorities said early on that alcohol or drugs did not impair Weller.

Perhaps Weller who had no criminal history or even a traffic citation during his entire life was really impaired by his age. I don’t think we can ever know the truth.

Why is this old man charged with enough felony counts to keep a teenager behind bars for a lifetime? The allegation is that Weller’s deadly driving was somehow reckless or intentional.
I guess some of the witnesses and prosecutors are clairvoyant and somehow know what Weller’s thoughts were at the time. The reality is someone is guessing about intent. This prosecution is nothing less than an outrageous abuse of power by the prosecutor.

Hundreds of friends and relatives of the dead and injured want retribution for their loss. Someone has to pay especially that feeble old man behind the wheel of the death Buick.

If Weller is found guilty of an intentional or reckless crime I suspect that the City of Santa Monica gets off the hook for their negligence in not taking steps to protect the pedestrians walking the streets hosting the Farmer’s Market.

Subjecting Weller to this senseless criminal trial will never reverse the damage done by this accident. I say the presumption here must be that this tragedy was an accident and nothing more. There are thousands of cases where elderly drivers have mistaken the gas peddle for the brake peddle and thankfully lesser damage resulted.

At 89, George Russell Weller is serving a natural death sentence anyway. How long is he going to live? Someone please tell me, what’s the real point of this prosecution?
Posted by Paul Huebl Crimefile News at 7/04/2006 10:32:00 AM

The bonehead relatives of the victims need to realize that prosecuting Weller will not help them get $$$ from the city of Santa Monica! The reverse is true here!