Ralphs Store In Venice Clean Up Has Ended 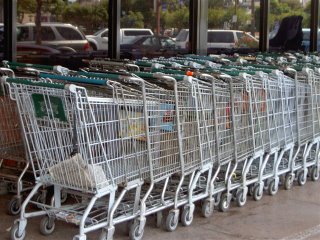 Another progress report or lack of it on the chronic unsanitary practices of the Ralphs grocery store located at 910 Lincoln Blvd Venice, CA 90291.

Last month they brought in 100 or so clean and refurbished carts. That was progress since they WERE clean when they arrived.

The bad news is that no steps were taken by Ralphs to protect the carts from being used by the local transients to carry and sort garbage. The transients use the carts for recycling the material they take from city garbage and recycle cans in nearby alleys.

I watched as a truck pulled up with filthy Ralphs carts retrieved from the streets and alleys. Soon a worker placed the nasty carts in line for shoppers without even removing some of the leftover garbage that was in them. Also, I observed that the sanitary wipes were not present at the entrances.

What will it take for Ralphs to deal with their biohazard? Ralphs is certainly free to pay their local transients to scrub the carts down with soap and water. If you missed my earlier stories and video you can see why the carts pose a health risk to shoppers.

I have an idea for Ralphs. Clean up or simply close that snake pit.
Watch the video below...

That rat hole needs to by shut down or burned out.

Where is the Health Department on this issue? How can they get away with this kind of contamination?