Perhaps Our Courts Will End Frisking And Fondling By Security Goons 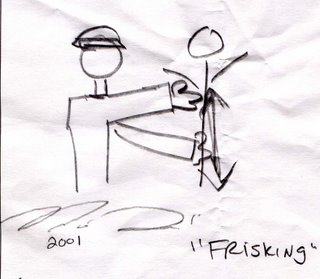 At least one football fan has stood up to being searched like a criminal for merely going to a football game. A 60-year old high school civics teacher Gordon Johnston, and Tampa Bay Buccaneers’ season ticket holder has charged that the searches violate state and U.S. Constitutional protections against illegal searches.

His October 2005 lawsuit was filed in a state court. The judge ruled in Johnston’s favor ordering an end to the searches. Next an appeal was filed and the Florida Court of Appeals, which agreed with the lower court ruling. Then the Tampa Sports Authority was able to remove the case to the federal court where a ruling by U.S. District Court Judge James D. Wittemore is soon to be published and appealed by whoever loses.

In the past three decades warrantless and random searching of Americans have become popular with an endless list of government officials citing terrorism as the excuse to suspend the Fourth Amendment to the United States Constitution. The paradox here is that terrorism is what facilitated the very existence of the USA.

We quickly created a Bill of Rights to protect American’s Freedom and Liberty. Our founding fathers were well aware of the death and destruction that terrorism brings when they crafted the right to Keep and Bear Arms and the protections from unreasonable searches.

The outcome of this case could very well end the frisking at thousands of government buildings, airports and sports venues. Before you panic about the falling sky try to remember that we all survived and got along for the first 200 years of our existence by limiting government frisking to suspected and convicted criminals.

My hat goes off to Gordon Johnston for being a real example to his students by protecting our Constitutional rights, Freedom and Liberty. There’s hope yet to keep government out of our personal possessions and papers.

I think Johnson and the Judge should be arrested for being supportive to terrorists. We must have random searches to at least try to stop terrorists from boarding planes to do us harm. What I do agree with is that we mostly have gooonie people conducting these searches who do not know which person to select for their searches. We need experienced, street wise cops who 8 out of 10 times can pick out a "nut job" quicker than a fleet of shrinks. I hate being searched as much as the next honorable citizen while mid-eastern looking guys are not being searched. I hate seeing nationaly known good American citizens being searched by nosey National Emquirer readers just to see what a star carries in their bags. This shit has got to stop! We need to PROFILE and select those types of people we strongly suspect simply because those types of people have crashed our planes into buildings before! Get it? Get over it folks, just because some blacks or some 30 something pot heads don't want to lose their stash, or reveal their panties in suit cases, it's to damn bad but we MUST profile. Profile is another word for being selective as to who we decide to search - why should we go directly against our good senses? So to Johnson & the dummy Judge, I say let them ride the planes with groups of people who have NOT been searched & you Paul can get on board to. I bet you all won't ride long, if at all? Signed your pal, Good American Andy.

I have preached profiling as the only Constitutional or effective way to deal with terrorists. Not so much on race but behavior and characteristics of the people we are seeking protection from.

I support heavy security made of well-armed and trained officers. The unarmed and poorly trained or screened security guards let loose on airline passengers are truly worthless.

I have said this before and the vast majority of the flying public strongly disagrees with me, but the warrentless searches ARE a violation of my individual rights. As for flying, End the searches and hand everyone a six shot revolver as they board their flight.

If that frightens you, then walk.

If you don't want to fight to save your own life and that of other family members, then walk.

If you want someone else to assume responsibility for your own personal safety, then move to the totalitarian state of your choice, but don't impose correctional facility procedures on me for the sake of timeliness and your personal traveling convenience.

No where in the Constitution does it say that purchasing an airline ticket is an automatic surrender of our protection against warrentless searches, but everyone seems to value their ability to get somewhere over their and our collective individual liberties.

signed: A Person Who Believes In The Constitution, not airline profits.

NO WHERE IN THE CONSTITUTION DOES IT IT STATES YOU HAVE A BORN GIVEN RIGHT TO GO TO A SPORTING EVENT,FLY IN A COMMERCIAL AIRPLANE, AND YES EVEN DRIVE.THAT IS A PRIVLEDGE GRANTED BY INDIVIUAL STATES.SO IF YOU DONT LIKE TO BE SEARCHED I SUGGEST YOU WATCH THE GAME ON THE T.V. AND DRIVE TO YOUR DESTINATION.I'M TIRED OF PEOPLE LIKE YOU WHO THINK THEY SHOULD BE TOLD ANYTHING AND THINK THEY CAN DO AND SAY ANYTHING THEY PLEASE AND SCREW EVERYONE ELSE.

The preceding comment was NOT made by a freedom loving American!

But the Bill of Rights still trumps everything!

The right of the people to be secure in their persons, houses, papers, and effects, against unreasonable searches and seizures, shall not be violated, and no Warrants shall issue, but upon probable cause, supported by Oath or affirmation, and particularly describing the place to be searched, and the persons or things to be seized.

The Fourth Amendment to the U.S. Constitution we fight wars to protect. You know, a small part our Bill of Rights.

If you are so afraid please stay home, watch the game on TV and walk instead of fly. Don't take MY rights away just because you are a true coward.

How did we ever survive without searching each other for the first 200 years in America?

Your rights are only guaranteed against government entities, not private companies.

You’re absolutely right it’s only a protection from government. But sports stadiums are often owned band regulated by government. If any tax is used the private shield is removed.

The airlines are private companies but regulated by the government. Click on the hypertext and read the court’s order.

IT FOR EVERYONE'S SAFTEY! NOT SOMEONE WANTING TO FEEL UP OLD MAN JOHNSTON! Apparently he doesn't care if the guy in front of him at the game is wearing a sport coat made from explosives. He just out for some money. Maybe he should buy a television and watch the games from home. He's a trouble maker in my opinion.

Otis, you need to learn what the very wise Ben Franklin said aout this subject. To paraphrase his coments, "Any society that would give up a little liberty to gain a little security will deserve neither and lose both."

I'd much rather have my freedom from these unlawful searches and right to bear arms than getting searched like some prison convict returning from a chow hall.

I can protect myself, family and friends just fine without government's hands in my pants.

You must be lonley and need the fondling...:)