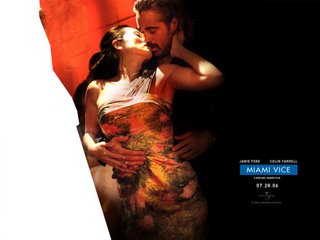 Fellow Chicagoan, Michael Mann took the concept of an elite unit of Drug War soldiers and made a great TV series. The series made fashion, music and art history as the salt and pepper teem of Crockett and Tubbs mixed business with pleasure. The series was pure entertainment despite some of the far-fetched episodes.

I confess to hating the Drug War even more than the blight drugs bring. Without the Drug War the Drug Czars from both sides would have to get honest jobs. Miami Vice is the only good product of this failed war.

The film was great and really far-fetched as the old heroes, now with new faces, those of Collin Farrell and Jamie Foxx. Michael Mann’s shoot-out scenes are as real as they could be. I almost felt the need to duck and grab my own gun! Isabella, played by Li Gong proves to be quite a distraction for the crime fighting, Sonny Crockett.

The cars, boats and planes were as fabulous as you’d expect.

Michael Mann himself wrote the script, and I fully expect at least two sequels from him down the road. Of course, I want a role as a crook or an inept police boss in the next one! Do you hear that Michael? Oh and before you ask, I have a card from The Screen Actor's Guild!

This was worth the price of the ticket and I’ll want to own the DVD when it hits the street.