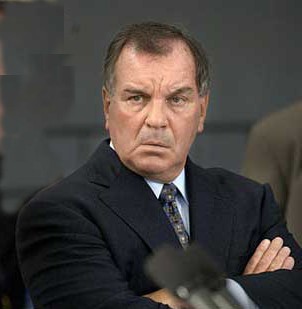 Not even a day’s worth of dust has settled on the Burge Torture Report and things are abundantly clear. A couple of politically connected cowboy lawyers were paid a king’s ransom a to undertake a prosecution that they knew well in advance could never happen.

The rule is that you don’t bite the hand that feeds you. In this case it’s Chicago Mayor Richard M. Daley who was the Cook County State’s Attorney when all these cases went down. We all know who runs the Cook County Courts and it’s not the judges.

With Chicagoan’s tax money flowing into their bank accounts like a raging river these cowboy lawyers turned special prosecutors danced with everyone and anyone they could find. The longer the cowboys could drag out the investigation the more tax hikes and bond issues would be required to fund this dog and pony show.

The whipping boy was easy to find. None other than former police superintendent Richard Brzeczek who clearly notified Daley in writing of the seriousness of the allegations. Only then Cook County State's Attorney Richard M. Daley had the power and duty to call for a Grand Jury investigation and it was Daley that blew that responsibilty off. The multi-million dollar cowboy whitewashers somehow shifted the blame to Brzeczek anyway!

Why bother allowing this monumental waste of time and money you ask? Who needs the image polishing here? Who needs the support of the Black community in order to be re-elected? Why none other than the former Cook County State’s Attorney who dropped the ball, Richard M. Daley.

With everything going on in the City-such as the on going and continual investigation of corruption and hiring schemes-are you really surprised? Daley has been untouchable for all these years. I wonder what his father would say... And now the hype over Cook County President John Stroger stepping down has finally come along and look at Strogers replacement-Bobbie Steele. Steele in her upcoming 4-month interim is all over the news on how she's going to cut spending and blah-blah-blah. Whats she been doing all the years she's been a County Commissioner other than obviously eating well? And the Democrats want to slip Strogers kid in?? Oh, please...
That opens the door to Welcome the Republicans for the first time in about 40 years, to the Cook County Board Presidents spot.
Funny so far, how the press, the Feds or other investigative agencies have failed to look at the Cook County Sheriff's office, (which by the way is the largest job holding entity in Cook County) in regards to outgoing Sheriff Michael Sheehan and Sheehan's hiring schemes and practices. Funny how Sheehan changed the law regarding the Cook County Police and Corrections Merit Board. Funny with all the heat on the cities hiring schemes involving the friends of friends, relatives of politicians, recommendations of politicians, big cash donators, that the investigation has not hit Sheehan-or maybe has it? Maybe he's getting cold feet or cold sweats thinking "Boy! Those Feds have to be the dumbest bunch of guys I've ever seen. The way I run things here in my Office, the way I hire only who I want, the way I promote only who I want, the way I shake down members in all my Departments from custodial, bailiffs, jail guards, and cops-especially those in the specialized units-to buy golf tickets...and all I've had to do is continue to hire retiring city bosses and retiring Feds for their second career with such great benefits such as a car, health plans, great pay and another pension and they leave me alone!" Now, his plan is passing the torch to his pib-squeek buddy Tom Dart! If that little twerp gets in-it will be business as usual! Only good thing is that this blog-spot will have plenty to write about. So stay tuned!

Has the distinct odor of a despotic monarchy. Has always amazed me how that obvious tyrants can get, and remain so popular. Hell, there are still people that adore Hitler, Mao and Stalin....go figure.

Daley has major clout, my guess, all the way to Washington.

Paul, you missed the story by a local columnist who wrote about Daley taking Bush to that Firehouse Restaurant Daley hangs out at. He called it the clout cafe as a buddy of Daley's owns it....