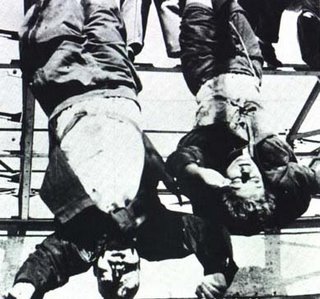 If you live in a state or district that swings to both major political parties and want to see your favorite Senator or Congressman in office it’s best to remember the 1994 massacre that turned out many long time Democrats after that now expired Assault Weapons ban passed the House and Senate by a single vote.

Today it’s easier than ever to keep up with the voting and legislative mischief of those we send to Washington. The Internet showcases those office-holding trolls who rob our pocketbooks or steal our Liberty.

The photo shows what happened to one deserving politician and his own version of Monica Lewinski after they violated public trust.
Posted by Paul Huebl Crimefile News at 7/14/2006 06:02:00 AM

Is that Bill Clinton and Monica Lewinski in that picture? If not they deserved worse!