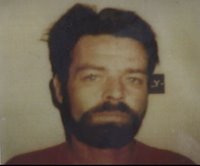 Last night KNBC-TV did an “exclusive” interview of an ex-wife of serial killer suspect Bill Bradford. That woman is Cindy Horton. Instead of reporter Ross Becker getting the real information he copied the style of Oprah or Jerry Springer. Becker went for the emotions of that failed marriage instead of asking Horton about Bardford’s habits, lifestyle and the other women in his life. The questions Becker could have but never bothered to ask:

Did Bradford ever tell you he killed anyone?

What places did you live together (with at least street intersections).

Did Bradford use drugs?

Did you ever see Bradford victimize anyone else?

Did he ever allow anyone else to victimize you?

Did he involve anyone else in crimes that you knew about?

Do you know any of the other women in the photographs?

There was a telling portion of Horton’s interview when she volunteered to Becker that she was asked by the cops to pretend to be on Bradford’s side and try and get him to incriminate himself. If true, that act by police was absolutely unlawful. Bradford was in custody and as a police agent; Horton had the duty to again inform him of his right to remain silent. If Bradford had a lawyer at the time this would have had an impact on the case itself. Any statements by Bradford to Horton would have been kept from any trial jury. My question to Bill Bardford's appeal lawyer, Darlene Ricker is, would this new information from ex-wife Cindy Horton become yet another appeal issue?

Here’s the KNBC-TV reports and video.