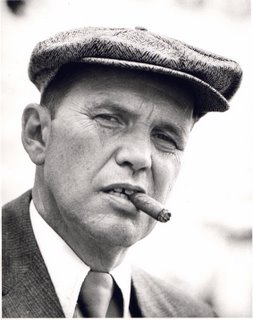 TV news is a place where everyone does everything almost exactly the same. Originality in TV news broadcasting was killed the day after Morrow’s image hit the tube. Nobody dares to stray from the format, the teases or the delivery. The good thing about Murrow was that his style and methods were easy to copy. TV news is not a place for individuals that dare to be different. That was the case until the King of Chicagoland’s crime reporters came along.

This King did not come out of any cookie cutter! He’s Chicago’s incomparable, John Drummond who has been a TV news, crime reporter for nearly 40 years. During that time, Drummond has learned more about police work and investigation than most street cops. He is considered as one of the boys in any police station within the Chicago market area.

Along with being far more informative than his peers, Drummond’s reports are fair and accurate to a fault. That, more than anything else earned Drummond the hard won respect and trust of the rank and file cops throughout Chicagoland. Cops are always the first to notice when any reporter gets a crime story wrong.

Drummond came to the Chicago television market after earning his reporting chops at a Rockford Illinois TV station. After a short stint as a radio reporter at, WIND in Chicago, where he covered a nasty 1967 Northlake, IL Bank robbery that resulted in the brutal murders of two cops. Drummond was quickly hired by WBBM-TV in 1969. Drummond began as a general assignment reporter and soon found a home reporting on the crime and courts beat. Drummond has covered nearly every riot, major crime, and court or police scandal since.

It was on n a really cold Chicago December 4th morning around 4:15 A.M., when a squad of Chicago police officers assigned to the Cook County State’s Attorneys office raided a West side flat. A horrific firefight ensued that resulted in the deaths of Black Panthers, Fred Hampton and Mark Clark. A catch of deadly weapons was recovered. The surviving occupants of the flat were arrested on a variety of charges. The controversy surrounding this raid has never really ended.

A Cook County Special Prosecutor was named and 14 officers along with the Cook County State’s Attorney, Edward V. Hanrahan were soon indicted by a Grand Jury on various state charges. The cops and Hanrahan were eventually cleared in criminal court.

How that case was resolved was beyond astonishing. A bizarre deal was reached in 1972 where charges against the surviving Black Panthers inside the apartment were dropped along with the charges against Hanrahan and his raiders. This was the beginning of an uneasy truce between the cops and Panthers.

It took more than an entire decade before the civil suit against Hanrahan was finally settled. Nearly two million dollars were handed over to nine plaintiffs. This internationally reported story typecast Drummond as a hard-hitting crime reporter for life.

Drummond has crossed the line from life to art as an actor playing a TV reporter. He can be seen in fellow Chicagoian, Andrew Davis productions, The Fugitive, Chain Reaction and Above The Law. With any luck Drummond will play himself this time in my film, Come Friday about Chicago policewoman Ann Leybourne.

I wrote two scenes for Drummond who actually delivered several reports on both the serial rape investigations and the later justifiable killing of the Friday Night Rapist by his intended victim. War hero Audie Murphy played himself in films, and so can Chicago’s King of crime reporters, John Drummond.

If I was a entertainment executive at a place like my friends of at Grammnet Productions at Paramount Pictures, I’d be gunning to open the very next TV season with 13 episodes of John Drummond, Crime Reporter. Who knows, maybe someone over there likes that idea.

I should have guessed there was a John Drummond book out there. My copy is on its way to me as we speak (Thanks John!). The book is available from Amazon.com 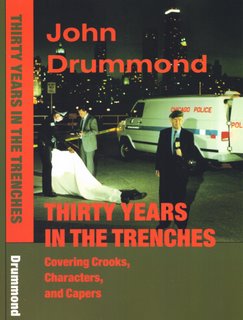 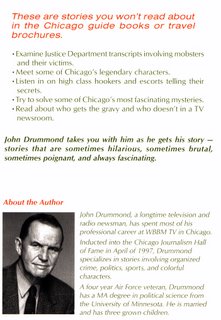 I believe that the picture for the cover of his book was "posed for".

I'm sure he has many friends in the CPD who would allow him to do it.

It better be a staged picture, if not the bulldog is trampling through a crime scene.

I wonder what copper played dead under the white sheet? Imagine a perfect crime scene with a stunning view of Chicsgo skyline. Just like Hollywood!

Drummond is a class act. Murrow was a hack, a bandwagon jumper, and a protector and apologist of communists in the government.

John Drummond is the best. He was alot better than that Sun-Times hack Art Pecaque (spelling?), who himself was connected to the Mob.

John Drummond is the bad ass MAN. Nobody has come close to his style and expertise on TV news, and I've been all over the country for decades.

The bulldog is the king of crime reporting in Chicago. I use to also love watching him do sports for wbbm tv 2 Chicago on the weekends. He would occasionally fill in.