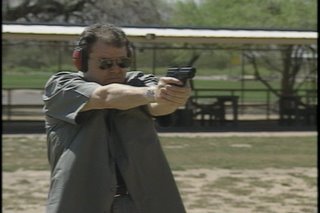 This is reprinted from the National Rifle Association.

U.S. Rep. Cliff Stearns` (R-Fla.) national Right-to-Carry (RTC) reciprocity bill, H.R. 4547, would allow any person with a valid concealed firearm carrying permit or license, issued by a state, to carry a concealed firearm in any other state, as follows: In states that issue concealed firearm permits, a state`s laws governing where concealed firearms may be carried would apply within its own borders. In states that do not issue carry permits, a federal "bright-line" standard would permit carrying in places other than police stations; courthouses; public polling places; meetings of state, county, or municipal governing bodies; schools; passenger areas of airports; and certain other locations.

H.R. 4547 would also apply to D.C., Puerto Rico and U.S. territories. The bill would not create a federal licensing system; it would require the states to recognize each others` carry permits, just as they recognize drivers` licenses and carry permits held by armored car guards. Rep. Stearns has introduced such legislation since 1999.

· Today, 46 states have laws permitting concealed carry, in some circumstances. Thirty-eight states, accounting for two-thirds of the U.S. population, have RTC laws. Thirty-four have "shall issue" permit laws (including Alaska, which also allows carrying without a permit), three have fairly administered "discretionary issue" permit laws, and Vermont allows carrying without a permit. (Eight states have restrictive discretionary issue laws.) Most RTC states have adopted their laws during the last decade.

· Citizens with carry permits are more law-abiding than the general public. Only 0.02% of more than a half million permits issued by Florida have been revoked because of firearm crimes by permit holders. Similarly low percentages of permits have been revoked in Texas, Virginia, and other RTC states that keep such statistics. RTC is widely supported by law enforcement officials and groups.

· The right of self-defense is fundamental, and has been recognized in law for centuries. The Declaration of Independence asserts that "life" is among the unalienable rights of all people. The Second Amendment guarantees the right of the people to keep and bear arms for "security."

· The laws of all states and constitutions of most states recognize the right to use force in self-defense. The Supreme Court has stated that a person "may repel force by force" in self-defense, and is "entitled to stand his ground and meet any attack made upon him with a deadly weapon, in such a way and with such force" as needed to prevent "great bodily injury or death." (Beard v. U.S., 1895)

· Congress affirmed the right to guns for "protective purposes" in the Gun Control Act (1968) and Firearm Owners` Protection Act (1986). In 1982, the Senate Judiciary Committee Subcommittee on the Constitution described the right to arms as "a right of the individual citizen to privately possess and carry in a peaceful manner firearms and similar arms."
Posted by Paul Huebl Crimefile News at 1/31/2006 05:03:00 PM

The big city Left Wing politicians will be jumping out the windows of tall buildings if this passes.

Over emotional brainless gun-haters are everywhere. So are the sensible gun owners that want this bill to pass.

One of the concerns about the bill is those who would "backdoor" their home states. 34 States are "must issue" states, the other 12 are "may issue."

New York is a "may issue" state. Florida is a "must issue" state and will issue to out of state residents (like New York).

So the NYC resident who's getting jerked around, gets a Florida permit, and through reciprocity, it is good in New York. That is one of the reasons that it is difficult to pass. Of course that could be overcome by saying a person must have a permit from his state of residence for reciprocity.

Better yet, New York and the other 11 states could change their laws, then the handful of others that have no such law could enact "must issue" laws themselves. But that won't happen anytime soon.