Sergeant Roy Swanson is a lifesaver… 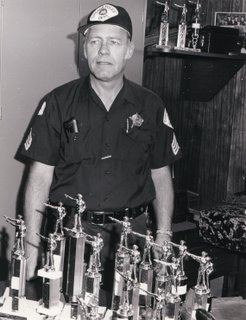 I have been through lots of firearms training throughout my life. It all began in Junior ROTC at Chicago’s Senn High School, then continued through The U.S. Army, The Chicago Police Department, and the Law Enforcement Firearms Instructor’s Development School just to name only a few of the highlights.

I’ve had firearms instructors, lots of them. I’m thankful for each and every one of them for keeping me safe and for the things they enabled me to teach others. The result of all that training is that innocent lives were and are still being protected.

Of all my instructors the legendary, Chicago police sergeant, Roy Swanson stands out as the best of the best. I say that because during the time I was a cop I never had to fire my service weapon at another human being. The training Roy and the others gave me helped keep me focused and in control tactically.

Then one warm October night while working in Arizona as a private detective, a drunken white-collar criminal who was armed with a Colt Gold Cup, .45, in near total darkness, confronted me. This, after I served his wife a court summons for eviction. He unexpectedly pistol-whipped me cutting open my scalp. I was stunned, went down on one knee as blood rushed out of the wound blinding me in one eye.

In an instant I had a guardian angel at my side. I heard the unmistakable clear and calm voice of Sgt. Roy Swanson, “Stay calm, and keep control!” Things were happening in slow motion. I drew my little .38 Smith & Wesson five shot Bodyguard. Rose to my feet and commanded my attacker to drop his weapon. The gunman walked backwards, then stopped, pointed his gun at me while saying, “I’ll kill you first!” I could not see the sights of my revolver and only the outline of my assailant. Instead of panicking, I squeezed off all five shots. I cold hear Swanson saying, “Take your time! Squeeze that trigger!”

All of my shots hit the armed thug. Three of the bullets struck critical areas of his body. One bullet traversed his arm interrupting the nerves between his brain and trigger finger. He never fell and I had no way of telling he had been hit or otherwise incapacitated. I did not stop to reload, but instead fled to safety. Because of prompt modern medical attention, the miscreant lived.

Because of my training and my guardian angel, Sgt. Roy Swanson I’m able to write this tribute to him so many years later. Sergeant Swanson, you’re a real hero to the thousands of officers you’ve trained!
Posted by Paul Huebl Crimefile News at 1/04/2006 08:40:00 AM

Ditto your tribute to Sgt. Roy Swanson for me - I could not agree more. Having trained at CPD with Roy & Tex and troops there, I think we had as you say, "the best of the best" in Roy Swanson. Sgt. Andy Murcia, CPD Ret.

Well said, I believe I was in his last class before he retired. Made me shoot the shotgun first and then told everyone, see nuthin' to it, if she didn't fall on her ass, none of you better. Gotta love Roy.

So the picture of the P.O. training the the female officers in the early 1970's is Roy Swanson??

Swanson the one with the dark blue utility uniform way in the back. The patrolman with the mustache is a guy named, Jim. I can't remember his last name.

are you sure that the other instructor is Jim something? He resembles Rich Peter who was also a range instructor beaten to death on his ranch in New Mex. or Arizona. Ask Roy, maybe the photo is after peters left.

FYI - Roy is listed in "Sick Call" in the Jan/Feb newsletter of the Evergreen Park #854 Amer. Legion. Will try to get more info. to you.

I just spoke on the phone with Roy who has moved to a care home in Orland Park, IL since his wife died before Christmas.

Roy says he’s doing fine and that he gets out regularly. His daughter was picking him up for an afternoon visit.