When Is A Pardon Really A Pardon? 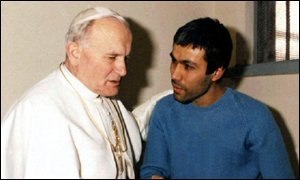 It’s a rare day in America when someone is pardoned for a notorious crime. It’s even more unusual for an offender to be pardoned and forgiven in our world these days. Habitual armed robber and convicted killer, Mehmet Ali Agca is about to be freed. Agca is now 46 and may be released as early as tomorrow. That’s what's been reported by, the Anatolia news agency. Agca’s most infamous act was the 1981 shooting of the saintly, Pope John Paul II inside St. Peter’s Square. Agca shot the Pope while on the lam after breaking out of prison where he was serving a ten-year sentence for killing a Turkish journalist.

Just one of the bizarre parts of this story is that Agca will immediately be drafted into the Turkish military. I guess the Turkish Army must need people experienced with guns and grenades.

Extraordinary and truly amazing was the visit Pope John Paul II made to Agca’s prison cell to personally forgive this papal assailant. I think the Pope was trying to set an example that people can change no matter how evil they once were. I can only guess that an offender’s change for the better may be somewhat easier when genuine forgiveness has been granted by a victim the crime.

A similar act occurred when victim, Mary Jo Buttafucco forgave the infamous, Long Island Lolita, Amy Fisher for shooting her in the face with a pistol. Mrs. Buttafucco personally asked that Fischer be paroled from a New York prison. The interesting part of that story is that since her parole, Fischer has apparently behaved a lot better than Mrs. Buttafucco’s former husband, Joey Buttafucco who has been supporting bail bondsmen and criminal lawyers these days with his repeated scrapes with the law.

America’s prisons are well on their way to becoming nursing homes with the aging of our criminals. We have thousands of incarcerated prisoners who need their diapers changed, are confined to wheelchairs or bed-ridden. America is too enamored with revenge to release these now harmless criminals back into society. Some of them arn't even aware they're in prison.

We need to watch and learn from the release of, Mehmet Ali Agca. I suspect that if he gets into the slightest legal jam it will make worldwide news. I guess I’m betting with the Pope on this one. Good luck, Mr. Agca.

I have my own amazing story to tell about my own experiences with Pope John Paul II that will be posted in this blog in the future.

Another update:
ANKARA (Reuters) - Mehmet Ali Agca, the man who shot Pope John Paul II in 1981, has been detained and is set to return to jail after Turkey's Supreme Court on Friday overturned a decision to release him.

Following the ruling, security forces seized Agca from an address in Istanbul and took him to police headquarters, Istanbul Governor Muammer Guler said on the NTV news channel.
Posted by Paul Huebl Crimefile News at 1/08/2006 05:15:00 PM

From the tone of your article it appears you advocate the release of all prisoners, no matter how violent their crime, once they reach advanced age or suffer a debilitating physical condition.

How can you, as a former police officer, take such a stand? In the case at hand, Agca is already a convicted murderer. Would you want him living next door to your family? I think not. He may have calmed down in his old age, but hes always going to be one step away from "snapping" and doing it again.

It is my opinion that the goal of rehabilitation should take a back seat to removal, retribution and deterrence in cases of violent felonies like murder and sexual assault, as the cost of failure is too high. So, to err on the side of caution, I say prisons should stock up on Depends and Ensure until these evil souls depart to their final judgment.

I'm only wondering if it makes sense to spend tax money for the security of a now harmless invalid.

I'm also a spectator to the future conduct Acja. I want to know if our Pope was right in granting forgivness. The odds are against the Pope.

I never bought the deterrence argument since the evidence is against that idea.

When is a person rehabilitated? Most cops I know says that only happens when the offender is dead on some slab.

Removal and rebtribution work for sure.

In the early 90's I locked up an elderly man for shop lifting. When I got his sheet back, I saw he had done TWO stretches for murder. If I remember right, each one was for about 12 years each.

Based on that premise, this guy is overdue to be released.