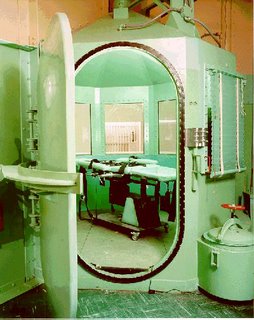 The killing of a 76 year-old, man who’s blind, nearly deaf and confined to a wheelchair is on the agenda for our society. There’s no question that the soon to be killed senior, Clarence Ray Allen is vile sort who earned his fate. The reality is that someone like this is long past being a danger to anyone.

I can’t help but believe it’s a cowardly act to take a helpless human being, strap him down and kill him. Add to this that the man is a blind, deaf and a cripple makes this killing especially shameful.

What a grand example we can use to demonstrate kindness or that killing others is somehow a bad idea to our children.

No I won’t mourn Clarence Ray Allen. However, I will morn for the humanity we will all lose here.

San Quentin, January 17, 2006. Clarence Ray Allen was put to death the day after his 76th birthday amid controversy over whether the state should kill a diabetic old man who, his attorneys said, could barely see, hear or walk. Supported by four large correctional officers, he shuffled from his wheelchair to the gurney where he was executed.
Posted by Paul Huebl Crimefile News at 1/15/2006 10:25:00 AM

I see now why you ended your career with the Chicago Police Department in order to be a private detective/writer. Apparently police work conflicted with your liberal thought process. Thus, you headed west in search of the liberal lifestyle.

This is twice in as many weeks that you've shown your liberal side in dealing with violent criminal offenders. First, it was Howard Morgan, and now its Clarence Ray Allen.

In response to your comment, there is a reason to kill a sick and helpless old man. In fact, there are two reasons. . . retribution and removal. Retribution, in that the families of the victims will get some sense of closure, and removal in that Allen will be removed from the coffers of the state. By killing him, taxpayers will no longer have to foot the bill for his food, shelter, clothing and costly medical care. More importantly, he will no longer be able to order additional murders.

As far as demonstrating that killing is a bad idea to our children, I can think of no better way than to show them what happens when one takes another person's life without legal justificaiton. Capital punishment is the law of the land, my friend.

In my fourteen years as a police officer, I've not met one fellow officer that disagreed in principle with the death penalty. I honestly don't understand where you come from on this issue. On one hand, your postings both here and on SCC show you to be right leaning when it comes to police issues, yet on this issue you lean to the ultra left.

You're one weird dude!

Name one person that was wrongfully convicted and suffered the death penalty. You can't which means the system works. God you do belong in la la land. Keep pandering to your left wing audience, you may get that movie role yet that you so much covet.

Police work was never a conflict for me because protection of life, property and liberty is what every cop swears to uphold the day he receives his star.

My rejection of the death penalty is based more on my personal experience with the wrongful convictions of far too many people. I would like to think that the oath that cops take really works more for justice with the goal of removing GUILTY criminals from our street.

It’s true that it’s rare to find a cop that does not support the death penalty, but they do exist. This is in no way a conflict to police work or the profession. I can compare my old wooden baton with anyone’s for teeth marks and alike.

I’m a lot of things but a Liberal is not one of them. The American Left Wing embraced the death penalty long ago for all the wrong reasons. Nobody has better demonstrated how to kill their own citizens as methodically as the Bolsheviks, Socialists and alike.

My views are really Libertarian with the goal of as small a government as possible giving freedom to the population. Liberals like to call me a fascist and extreme Right Winger.

I have personal knowledge that an innocent woman, Debra Jean Milke has been on death row in Arizona since 1989. I was sent to the jail with a hidden tape recorder and I had hoped she’d implicate herself or others. She was solid in her firm denial of involvement in the act. Ten days late a Phoenix homicide dick with a history of manufacturing confessions submitted a supplementary report that she confessed an hour before she made the denial to me. No, tape, written confession or another witness exists to support the bogus report. No other evidence of her involvement in the crime surfaced. The jury chose to believe the cop.

Phoenix mailman Ray Krone was twice convicted and given a death sentence for a rape/murder. The evidence was a bite mark comparison vetted in court by a charlatan. Finally DNA evidence cleared Krone who had no criminal record or history of violence.

Before video surveillance and DNA testing we could clear murders by arrest at a rate well above 80%. Now with the new tools we can only clear 40% of the murders by arrest. If you do the math it’s really simple to conclude we’ve killed lots of innocent people along the way. Convictions based on faulty eyewitness identifications are very common.

The fun part about video surveillance is it can be double proof. The suspect is recorded in a store or gas station miles away when the real suspect is seen committing the crime at the crime scene.

Death is not a sentance our society should be looking upon to satisy our need for retibution and revenge. It IS on the other hand sometimes needed in order to prevent violent criminals from taking more life. This man is no longer a threat to society. Let god judge him. Well said paul!

I'm a Chicago copper and I'm against the death penalty. But in fairness, as your first posting said, I'm not against the principle, it is the application that bothers me.

Long ago I arrested a guy who had two murder convictions and had done time. What was he doing out on the street? If we're going to execute murderers, then we should execute them all. Anything else is not just. Also, if we make a mistake, we can't just say "oops" and bring them back. Illinois had the distinction of releasing 13 death row inmates a few years ago because it was determined they didn't do it. Not legal technicalities, but they didn't do it.

To execute one person wrongfully is one too many. Life in prison, in solitary confinement is a just punishment. Let them have cable tv, a radio, desk and a shitter. Then they can sit in their cell and watch life pass them by.

But even that is too extreme for some, and life in prison without parole is only as good as the legislative body that chooses not to overturn it. I'm convinced that before I die, some state will reconsider life without parole, or some executive will grant clemency to an obviously guilty person, and then "life without parole" won't be worth the paper it's printed on.

I guess I was right, you can't name one person that was wrongfully convicted and executed. So the system does work.

Well, I was going to write I was probably the officer from the first post whom he met that was opposed to the death penalty. Now I see that there is a post at 12:05 who is also opposed.

I have not met any other officers opposed to the death penalty. I am glad to see there is another.

I am not not so opposed to the death penalty because an innocent person might be sent to jail, as I am opposed to it being administered in ANY case.

State-mandated murder serves no useful purpose. It does not deter crime.

Maust apologized repeatedly for his crimes. He also was convicted in 1981 of killing an Elgin teen and was imprisoned for manslaughter while he served in the U.S. Army in Germany.

HMMMM. . .if Maust had been subjected to the death penalty then, he certainly couldn't have killed 3 teens in 2003.

The death penalty certainly could have worked in this instance.

The real problem are the soft judges that let criminals back on the street way too soon. We don't trust the faulty system and know the death penalty is final.

It is a dilemna with no real solution because the country is so polarized with nuts.

Liberals want to kill the unborn and protect the guilty

Until this country becomes more moderate, no meaningful discussion will ever take place on the death penalty, abortion, etc

Hey Lefty...I'm 12:05 and I usually disagree with you. I guess we're in agreement on this one though.

I wish to amend my statement....BASIC cable, radio, desk and a shitter. Since they're not going anywhere, they can wait for movies to hit basic cable.

If they REALLY wanted this guy to suffer, why not do what the hospitals in LA do -- dress him in a hospital gown and drop him off downtown outside the mission without a penny.