The immigration invasion of America. Yet, another view... 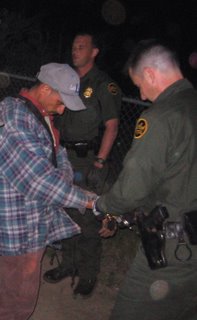 First of all I have nothing against anyone for his or her heritage, religion or color. I do have a problem with the criminal culture, along with the blight, death and destruction it brings. We've been invaded and did nothing to prevent it.

Who are these invaders? They’re hungry, poor and uneducated. They’re seeking refuge from the most corrupt miserable government in the Western Hemisphere. Our open arms policy for Mexico’s citizens allows this Mexican Cabal to stay in power.

Mexico is no friend of the United States. Mexico’s officials know that the flight of their unhappy population to the United States reduces the likelihood of a much-needed Mexican revolution.

Imagine if 30 million Mexicans were forced to return to Mexico after spending several years here. I don’t think they’d tolerate their old government leaders very well and take to the streets to fix their country.

Mexico has all of if not more resources than our country. They don't have an acceptable real free enterprise system. Mexico has no education agenda for anyone who is not wealthy. Instead of commerce, Mexico breeds poverty, ignorance, crime and violence.

What’s needed are a bright group of men and women that understand freedom and the way to a better way of life in Mexico. We were very lucky for having the likes Thomas Jefferson, Ben Franklin and the rest of our founders. They were people with the courage to risk their own lives and limbs to form a government they can be proud to have.

Since so many Mexican citizens would rather live here, it’s imperative they be sent back with the tools to remake their own country. Maybe it's long past time time for a good, old fashioned CIA plot to destabilize the Mexican Government? A plot with the goal of creating a second democracy based on the USA model South of the border. If it was done right, our citizens would be sneeking into Mexico.

Because Mexico refuses to reform in any way, it’s time to start giving the Mexican government the cold shoulder. We have enough unskilled, uneducated and needy people here. We must stop bringing in more. Any foreigner living here who is unwilling to learn English should be deported.

One thing for sure, we have a major crisis over our worthless and meaningless immigration enforcement efforts. What's needed to get the attention of our own politicians to fix the problem?
Posted by Paul Huebl Crimefile News at 1/24/2006 08:47:00 PM

Hell if Mexico forms a real government like ours was 200 years ago I'd learn Spanish right now and slip by their border guards!

Charming blog. Your site was off the chain and I
will return! When I get the time I look for blog like
this one.
You got me! I will check out your wv west virginia house cleaning blog a.s.a.p!