If I get caught, I’ll just tell’em I’m Bill Clinton! 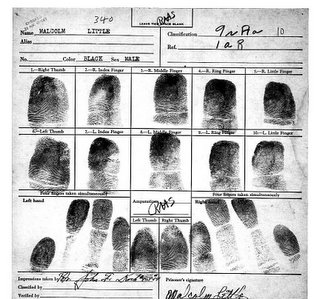 What’s in a name? If I ever get arrested for some disgusting or notorious crime I’m going to tell the cops that my name is William Jefferson Clinton. That may sound cute, but the cops will book me under whatever name I give, and throughout that entire case the name will be attached to that record. Somewhere they may attach other names to the record I have used in the past, but they will never remove William Jefferson Clinton from that record. What’s even more fun is that I happen to know former President Clinton’s date of birth and social security number and they will incorporate this information into the record too. So much for a public criminal court record being proof of anything at all!

So how can anyone tell who is who? The way the cops do this is through numerical values assigned to a full set of 10 fingerprints on an inked card or scan file. That’s a fingerprint classification number that you will see in the upper right corner of a set of fingerprints taken from convicted criminal, Malcolm Little also know as Malcolm X.

Fingerprinting by local cops was too often a disaster. Many local cops did not collect the prints correctly and the fingerprints could not be classified at all. A person could be arrested for a felony, give a phony name and if he got less than a prison term he may never be fingerprinted again! This has gotten better with improved training.

When the fingerprint system was established criminals tried to defeat it with acid, sandpaper and even cutting the skin. The results made their prints even more unique and identifiable. Bank robber, John Dillinger found this out the hard way.

There is a way to change your fingerprints for good. A person seeking to hide is identity for good can have the skin re-transplanted on his fingers with skin from his toes. The fingerprint technicians can be easily fooled by simply re-transplanting only one or two fingers.

A former client of mine, known at least for a while as, David Pecard actually performed this surgery on himself and spent a couple of decades as a world class imposter who masqueraded as an Army General, medical doctor, lawyer, and was even appointed as a Deputy Sheriff in Maricopa County, Arizona despite a prior felony arrest record.

DNA will soon be the new standard to supplement fingerprints. That will prove to be entertaining too as scientists are working on ways to change people’s DNA to avoid diseases.

Here is a case where a doctor admitted changing a fugitive's fingerprints.
Posted by Paul Huebl Crimefile News at 1/21/2006 10:15:00 AM

I see that you must be a part of The Vast Right Wing Conspiracy!

How was David Pecard one of your former clients?

David Pecard was charged with various offenses in Arizona. I was his defense investigator and we had a happy ending when Pecard was cleared of the charges.