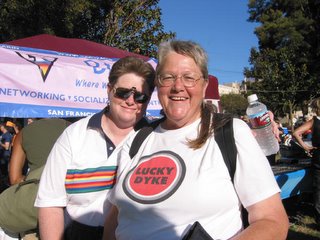 Okay, I confess to not understanding the lesbian community on a couple of issues. First of all, I have nothing against lesbians. I am just like them in that I prefer women any day to men!

Why is it that the dykes demanded abortion rights and fought so hard for draconian laws against domestic violence? No lesbian can get pregnant without the help of a really friendly fellow. No lesbian can get beaten by her husband, unless of course she has one. That may sound simple, but it’s not.

By supporting these anti-men platforms the reality is our lesbian ladies can win the trust of the pregnant and abused women to better seduce them. Comfort and companionship is always needed by these victims of men’s foul deeds. The dykes are always ready and waiting!

It was little more than two decades ago when I watched a large demonstration against domestic violence. More than a hundred, dumpy and homely dykes who all had crew cuts and wore men’s clothing, ranted and raved about men beating their wives. They demanded new laws. The laws against assault, battery and murder were in place in all 50 states. I’m sorry, I could not then nor do I now see any problem. You could not get any women in this bunch to live with a man on a bet! I don’t know too many men that would fall in love with these bulls either.

I don’t want to be seen in the light of supporting men who beat women. Those cowards need to be Severely dealt with by conventional laws. Unfortunately women are sometimes injured or even killed by their abusive partners. Too often some domestic violence victims fall in to a bizarre, victim mode where every partner they choose beats them. I won’t even try to explain that one.

The politicians all listened carefully and soon crafted new domestic violence laws that exacted punishment from the accused even without a criminal conviction. The only needed law that made sense to me was one prohibiting a man who beats his wife from having a wife. The politicians somehow overlooked that idea.

Yep, men were soon arrested by the boatload. Trees were killed all over America for use in making paper for Orders of Protection. Our courts began handing them out like candy to anyone and everyone. Probable cause or proof is not needed to obtain such an order. Congress even went so far as to prohibit as a felony, the possession of a firearm for life of anyone convicted in the past of threatening or assaulting a domestic partner. The hapless people served with a domestic violence order are even required to surrender any and all firearms for the duration of the order.

Then something strange happened. Lesbians soon found themselves behind bars for; you guessed it, domestic violence. It seems that lesbians have their little spats too. We can only hope that our higher courts can undo some of the silliness brought on by America’s dykes.
Posted by Paul Huebl Crimefile News at 1/06/2006 07:42:00 PM

Where did you find those two hot babes?

Do you think they will pose naked for my magazine?

I too am a lesbian in a man's body!

Okay, I confess to not understanding the lesbian community on a couple of issues. First of all, I have nothing against lesbians. I am just like them in that I prefer women any day to men!

So do they. In fact, as they have told me, they even like penises. They just don't like the pricks they're attached to!!