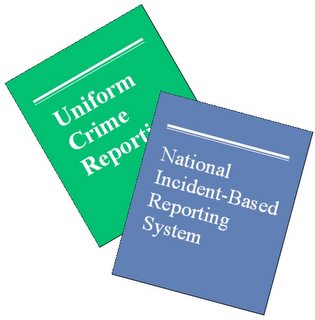 It's the end of the year and cities like Chicago will be releasing crime statistics to the egger news reporters who tell their viewers and readers how safe their city is or is not.

The FBI began collecting data about crimes sometime before 1970s in what's called the Uniform Crime Reports or UCR. Soon each state followed suit. The idea was to spot trends that could somehow be controlled by law enforcement. By default, this became a tool for local government to obtain more federal tax dollars. What we really got with the UCR was a Pandora's box filled with misleading and meaningless paper.

Police departments everywhere conformed their crime case report headers to match the UCR definitions of the involved crimes rather than the titles under the state laws that were violated. Police administrators would then transmit the numbers to the FBI. The idea was that data from each incident would be stored for later study and used to better deploy resources. Crimes were classified as to being the more serious, Part One crimes or the less serious Part Two crimes.

Along the way, local politicians found ways to exploit and abuse the UCR statistics to feather their incumbency. When the politicians had good numbers they would generate press releases taking credit. If the numbers were bad, challenging candidates running for office would issue their own pressers blaming the incumbents. The media soon began examining the numbers and to this day treat these statistics as fact.

Between incumbent politicians and their appointed police chief's, creativity would not be lost. They would soon conspire to subvert the entire concept of the reports to either look better in the public's eyes or to raid the federal treasury. The UCR lost its credibility along the way. Police administrators taught their officers clever and cute ways to skew the UCR statistics.

This is how it works. When an officer would respond to the scene of a residential structure where a door or window was broken and property was taken, the heading of the officer's report should be, Burglary. Then the crime is cleared by an arrest or not. That's simple enough. The problem is that burglaries are an ugly, Party One crime.

The officers are simply told that their reports will be classified as Criminal Damage to Property for the door or window breaking and Theft for the taking of property. They should steer clear of reporting the more serious burglaries. Instead they'd be reporting the softer, and more tolerable lesser Part Two crimes.

They soon added a little twist to this since showing no burglaries would raise red flags and quickly prove deceptive. They dictated to the officers, that if they made an arrest and cleared the crime, then the officer's report was classified as a Burglary. This way, they could show nearly a 100% clearance report for any and all burglaries!

The rank and file cops nearly always go along with the charade because it makes them and their fellow officers appear to be more effective crime fighters.

Murders are the most difficult of crimes to cover up. Cops can't simply run around hiding the bodies of homicide victims. A better way is to classify the report as a Death Investigation. This is playing with the variables such an accident, a suicide, natural causes or something else. This is really easy to do when the victims are marginal people with no families or friends scrutinizing the cop's actions. A perfect candidate for the cover-up would be dealing with a dead whore found in the dumpster with needle tracks all over her arms. This is the most difficult kind of case to solve anyway. The idea is that the Death Investigation can be reclassified if an arrest is made or not.

Will the news reporters be able to prove the deception? The work involved would bust the budget and resources of any news organization in a large city. But with homicide cases there's a simpler way to uncover the chicanery.

Using public records, and freedom of information laws reporters can obtain the names, dates, locations, cause and manner of death statistics from the county medical examiner or coroner's offices. Then they can match the numbers with the "official police" offering and they may just have some really tough questions for your local police chief about cooking the crime statistic books.

The best tool used to kill crime these days is a pencil. Making the crime statistics of the community match the desired results sought by elected officials, to fool the public and media is a snap.
Posted by Paul Huebl Crimefile News at 1/01/2006 08:14:00 PM

The media has not caught on to this in 30 years. It's been a standing joke with us as long as I've been a cop, 22 years here in Phoenix. For the fist ten years they had us upgrade everything to part one crimes. Then they started the downgrade program. I never knew quite why. Thanks! Good story!

Mayor Daley wants to prove that the Chicago gun ban somehow reduces crime. I'm sure that why they have been playing games.

Good job providing info to the media to debunk the trash provided to the public as statistics!

You don't even know how much they're downgrading crime in the city of N.Y.. They have even gone as far as classifying homicides as suicides.

As a 25 year veteran of the Chicago Police Department, I can tell you that your story is true except for one small item. With the exception of those that wished to curry favor with the bosses, the rank and file or "field" Officers" NEVER went along with it no matter who asked us to do it. As a matter of fact, I do not recall them asking us to do this in many, many years. What they do now is to simply have the detectives re-classify these types of crimes that you speak of. I've seen them reclassify a Homicide to a Robbery so the stats look good. I could go on and on but I think you get the idea. One more. Police are called to a "shots fired" call. Police arrive, find a women shot several times in the face. The offender (husband) who is attempting to clean up the blood (it was a Domestic), upon seeing the Police at the front door, flee and are subsequently caught by a fast footed P.O . What was he charged with you ask? Accidental discharge. Why? Our homicides that year were at, IIRC, 599 and they didn't want it to top 600!

I have found that certain Sgt's. will kick back a case report, wanting a reclassification (such as Burglary to CDTP), when that Sgt. learned to kill crime as a PO in certain districts. They were brainwashed as POs.