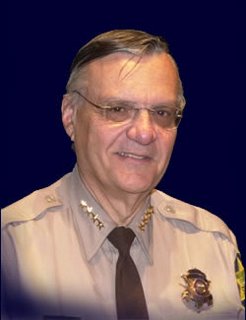 America’s self-proclaimed, toughest sheriff never met a TV camera he didn’t love. I’m sure he stays up at night figuring out ways to hold yet another press conference to unveil some new way he’s found to humiliate, deprive or otherwise cause suffering to his jail inmates. I’ve never really had a problem with this except for one not so minor detail. A portion of his inmates are not criminals, but people simply waiting for a day in court to prove their innocence. Criminal allegations can stem from mere finger pointing by a mistaken or prevaricating witness. Some innocent people have had to sit in jail for as long as three years waiting for their trials because their bail was set too high for them to post and be released pending trial.

Sheriff Joe is the guy who put his prisoners in striped uniforms, pink underwear and confiscated their girly magazines. Along the way Joe also established chain gangs for the hapless men and women who reside year around in tents.

I’ve known Sheriff Joe since before he was Sheriff and found him to be personable and even enjoyable to be around. His diabolical sense of humor is truly unique and entertaining. In another life Joe could return as a successful comedian.

Sheriff Joe has his detractors who have vented their frustrations to the Phoenix New Times. The allegations and lawsuits against Sheriff Joe and his administration have been ugly, expensive and avoidable.

Sometimes Sheriff Joe has a good idea that’s worthy of yet another press conference and this may be one of them. Of course, I’m going to take credit for the idea that I gave him sometime in 1997. Sheriff Joe took thousands of active arrest warrants and placed the database on the Sheriff’s website. The public is invited to check up on their family, friends, neighbors, and of course enemies. Should a fugitive be located on the database the idea is that Joe’s new "Techno-cop Posse" will drop a dime on the fugitives and Sheriff Joe can hand out more, green bologna sandwiches to his new tenants.

Not all warrants can be listed in this very public forum. Warrants issued as a result of a Grand Jury Indictment are secret until served on the suspect. Joe is working on getting changes made so that every warrant is listed.

What I like about the website is that parents looking for baby sitters, landlords screening prospective tenants and of course employers checking on new hires can be protected from criminal fugitives. This is a reasonable extension of the “Megan’s Law” concept that put the convicted sex offenders in Cyberspace.

Now the bad news, in Maricopa County alone there’s over 70,000 fugitives. If they were all caught in a day, week or even a month they’d have to use the largest sports stadium to house these folks. The courts would be absolutely crushed under the weight of all these cases. In any event I hope this idea spreads across the country.

Sheriff Joe is one of a kind. Thank God!

Sheriff Joe is the biggest MEDIA HOUND on the planet!

Sheriff Joe may wind up in his own jail someday on federal charges.

I'm wondering how many arrests will happen because of yhis website?

If Sheriff Joe winds up in jail because of federal charges, he won't be in a county jail. He'll be in a federal lockup.

So pray tell, what federal charges would he find himself facing? Making prisoners wear pink underwear?