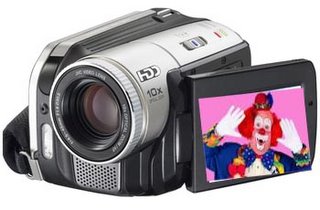 The St. Louis MO. Branch of the ACLU announced they were planning to give away video cameras so that people prone to police brutality victimization could tape the cops beating them. Forgive me for being skeptical of this ACLU brainstorm but I think it’s both comical and a waste of their donor’s money.

There’s a nervous buzz about this among my Chicago cop friends who fear that video scenes taken out of context could land them on the other side of the prison bars. I guess this is some sort of retaliation for the installation of the Chicago Police Ghettocams in high crime neighborhoods. Wait a second! This is happening in St. Louis, not in Chicago.

But what if they do this, catch-a-cop-on-camera crap here? Officer Wallupemgood put that question to me. I told him I thought that this was a tit for tat situation, just don’t get caught on camera dishing out too much tat!

Okay, being the wise man I am, I figured out the reality of this situation. If the ACLU hands out the cameras to responsible people in these neighborhoods where the brutality complaints are being made, that’s the end of the problem. Responsible people work at jobs and need to sleep at night when this stuff supposedly happens. The camera operators and the cameras will be, in bed, snug as a bug in the rug. There will be no incriminating video popping up on the Six O’clock News.

All right, the ACLU is smarter than that. The ACLU will give the cameras to the neighborhood lads in the thick of the action. This should not create a care in the world! Let’s see, the ACLU hands out 10 cameras to the boyz in the hood. Five will be traded for crack or that AK they’ve been looking at. The other five will be in the hands of those too enamored with their new toys to give them up. These cameras will be working all the time! Of course they’ll start with the homemade porn flicks. Then they will use the cameras to tape each other in their colors and whip out firepower so they can see themselves on TV like their heroes, Tupac and Tookie.

Finally, the good part! Our boyz use these cameras donated by the good folks at the ACLU to document their next crime spree. Guess who will catch these guys and confiscate the cameras as evidence? You’ve got it! Yep, Officer Wallupemgood!
Posted by Paul Huebl Crimefile News at 1/02/2006 06:13:00 PM

I have not laughed this hard in a year! Thanks for the reality check.

Too bad the "boyz in the hood" are not smart enough to post some videos on line for us to see...

You'd be surprised, no I guess you wouldn't, cases we've had where the goofs tape themselves during, or just before the crime.

Your views here are racist!

Racist? I don’t see how. What race are we talking about? I will confess having a strong cultural bias against any culture that embraces violence, theft and drug abuse. I guess it could be rightly said that that cops aren’t fond of robbers…

They can videotape me all they want. The worst thing is they may hear me say "asshole" but that's it. I'm not a lumper or a thumper, and I think I know how to talk to people.

If talking doesn't work, then let's rock and roll, and you can tape it if you want!

maybe they can create a new reality
crime drama and call it "Perps".

I read this yesterday and could not stop laughing! I had to come back and read it again! Where do you put up this comedy act Paul? Where can I buy tickets?

Since all responsible people sleep at night I guess people who work night shifts should be arrested? That is really how simple you are making it seem. The point behind this move by the ACLU is to catch bad cops, the type that stop a person of color for driving a nice car. Though I think they should use hidden cameras instead. There are plenty of crooked cops out there and it needs to be shown in the media instead of the propaganda show "Cops". They should make a show with some of the realities instead of making the police always seem like the good guys. I think most cops are good, but with this "war on drugs", there is the real incentive of making money on the side from innocent people by misusing probable cause.

So what happens when the kids with the camera catch a criminal on tape doing a crime, like drug dealing, shooting, robbing?

Will they turn that over? No.

Remember, they live in a culture that thinks it's cool to ware a shirt that says "If you see the police warn a brother"

Go forbid you try to improve your neighborhood and help the cops arrests the thugs that make the place a dump!

watch how many of these "boyz in the hood" pawn off the camera's or video tape their crimes instead of the police.