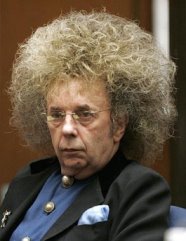 That 1960’s rock & roll record producer is soon to face a Los Angeles jury for charges that he murdered his evening date, Lana Clarkson. She died from a single gunshot wound to her face.

This case has a familiar odor about it. That of cops and prosecutors getting famous by accusing the famous. One thing for sure whatever the prosecutors can’t get into evidence in a court of law they will get to the jury through media reports of every kind.

The questions are simple the answers are not. I have several that so far have not been answered.

Who owns the gun that made the fatal injury? We know that Spector has a small gun collection and the gun in question came from elsewhere.

What was the psychological condition of Ms. Clarkson? We know that she was using illegal drugs and was under the influence of alcohol too.

Is this prosecution really about another civil action to follow the criminal case? We know Clarkson's family is standing by ready to loot Spector’s estate with a civil verdict if they can get one.

Is it fair to bring up allegations made decades ago that were never substantiated enough to merit prosecution when they happened? Does the jury really need to hear from Spector’s disgruntled old girlfriends and such? How is a criminal complaint from ancient history going to prove just how Clarkson died?

This case revolves around the alleged excited utterances supposedly made by Spector to a limo driver and cops who had over-reacted and tasered Spector moments before. Did they even get these remarks correct? Were they just trying to justify their use of a new law enforcement toy by making a killer out of Spector? I find under these kinds of circumstances people never get these kinds of quotes straight.

If there’s an event involving two people and the physical evidence cannot reconstruct the event why do we waste time and expense of a trial, when we don’t have an eyewitness or a confession?

I say its time to leave Phil Spector alone.

12/17/05
Update: TMZ.com reported that Spector has dismissed his pending lawsuit against his former criminal attorney Robert Shapiro.Shapiro took a one million dollar retainer to defend Spector in the murder case. That representation somehow went sour and Spector hired flamboyant, mob lawyer Bruce Cutler to take over the case. Cutler is not licensed in California so he had to associate-counsel with Los Angeles Lawyer, Roger Jay Rosen. Shapiro refused to return Spector’s money, which is the basis for the lawsuit.

The problem was and is that Spector’s criminal defense communications with Shapiro were in danger of being exposed to prosecutors. Spector had no choice but to dismiss his case for now. Spector is still free to re-file his lawsuit after the murder case is over.
Posted by Paul Huebl Crimefile News at 12/16/2005 03:13:00 PM

The man stirs his morning coffee with a Double Action Revolver. It's not incriminating, I just though some one should know.

That does not make him a murderer. That would make him a guy with a rusty revolver.

The goofy DA will do anything for publicity. Another waste of time and tax dollars in progress.

That hair make him GUILTY!

What drugs were Spector on that night?

I vote Not Guilty. There's no case.

The one who is the criminal is Shapiro. Watch for him to turn on Spector just like he did on OJ, Brando, F.Lee Bailey, and anyone else where he can get publicity for his venal self

I for one don't know.

Regarding the gun....where did you get your facts that it came from "elsewhere"? If you look at the court papers you will see that the murder weapon had distinct, rare, bullets in it...and, as it turns out, the same bullets found in a couple of other guns at Mr. Spector's house. What a coincidence!!In fact, the bullets were so rare that the police had to borrow Mr. Spector's bullets to do "test-fires" for their reports because that type of bullet had not been on the market in over two decades! Yet...there just happened to be several more of those bullets in Mr. Spector's own house.....hmmmmm?
As for Spector going from Shapiro to Cutler...what about Leslie Abramson? She was on the case for a few months, too.
Yes, Shapiro is a dog for blackmailing Spector into dropping the lawsuit. Shapiro threatened to turn his deposition to the government if he didn't drop the case.
But, the biggest sleaze is Cutler, just check out his performance in the mafia cops case. That will give you an indication of his work ethic or lack thereof. He is being sued for malpractice by his last client who states that Cutler's entire closing argument of a 3-4 week trial lasted 12 minutes, 11 of them Cutler was talking about himself, his high school days, the fact that he lost 14 lbs. during the trial, and other nonsense.
The biggest sleaze may be Cutler....but the biggest idiot is Spector. It is inconcievable how Spector can read about Cutler's non-performance in the "Mafia-Cop's" trial and he still insists on having him as his lead council. Cutler has already led him down the path of no return. Cutler has let Spector talk, and talk, and talk, it dosen't matter to Cutler that Spector's comments have made their way into the government's next exhibits. As long as Cutler is seen on tv, he will let Spector get away with saying anything......until the trial and we can be sure that Cutler gets his money before the verdict is read!!!

A fact of life is that lay people pick lawyers based on what they see on television. That’s generally a really poor reason to pick a lawyer. Cutler did very well for Gotti and that gave him free publicity.

Cutler’s style is all showmanship and bluster. It’s that old argument about style over substance. I’d personally pick Roy Black on a shooting case like this over almost anyone else. I’d also bring in firearms author and trainer Massad Ayoob as a shooting re-constructionist in addition to the experts he already has.

I’d second chair the defense table with a woman to ask those delicate questions about the dead woman’s drug, alcohol abuse and mental condition since she was forced to work in a menial job because her acting was not supporting her. I just can’t see Bruce “Bullet Head” Cutler beating up on a dead woman in front of a jury.

That issue of the bullets does not really mean much. Many people buy bullets at the time they buy a gun. This gun was a Colt made and sold on a certain date. Spector has an identical gun in his personal collection. It would make sense that if the guns were made and sold around the same time that the same bullets were then stocked by gun dealers in that time frame. Very often people buy guns and ammunition at the same time. They then load the guns and leave them in that condition for as long as they own them.

I’d think that a motion in limine would be made and granted to keep that bullet issue away from the jury would be proper under the circumstances unless they have evidence that the death gun was in fact Phil Spector’s. That bullet issue is too prejudicial to the defense.

In the early to mid 1970s Smith & Wesson manufactured millions of rounds of their popular +P ammunition. By the late 1980s Smith & Wesson got out of the ammunition business. One can assume that people buying .38 special revolvers would have also bought that popular brand of ammunition with their revolvers.

Modern ammunition has a shelf life that will span decades as long as the rounds are not contaminated with oil or water.