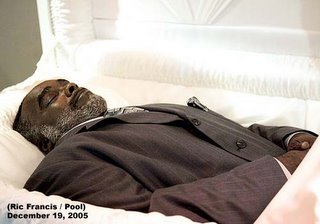 Stanley “Tookie” Williams, a street thug, convicted mass murderer and Crips street gang founder lies dead. I don’t in any way condone his lifestyle, deeds or reputation. Williams was not a friend of mine and I don’t mourn him.

Is he innocent of the four murders that put him in this box? With our broken justice system that’s really possible. I just don’t know. Frankly the track record of overturned death verdicts speaks for itself. My guess is that he’s responsible for some really despicable acts while he roamed the streets of Los Angeles. The problem is that he was convicted of four horrible murders. What he may have done is not the concern of our criminal justice system.

The real issue here is can any government be trusted with the power to kill its own people? Sooner or later every government on Earth has or will abuse this kind of maximum authority. The death penalty is a bad idea.

I don’t think I will ever be able to convince people that the death penalty is wrong and should be stopped. Can we at least raise the standard of proof above that hard to define, “beyond a reasonable doubt” when we execute our fellow citizens? How about requiring proof beyond any doubt?

What we have now is a system where a small amount of circumstantial evidence and the word of a government snitch is all that’s needed to convict and kill someone.
Posted by Paul Huebl Crimefile News at 12/20/2005 05:33:00 AM

I don't know what sucks more Tookie or the death panalty. They seem to deserve each other.

Paul: Say what you will about the death penalty, but there are specific instances where heinous crimes warrant the ultimate penalty simply because society, in general, deserves and often demands an iron-clad guarantee that people like Ted Bundy won't ever kill again.

Frank I agree there are those crimes. The real problem is in the standard proof issue.

Well written post P.H. An incredibly tough issue, hopefully with the influx of cheap video surveillance and constantly improving D.N.A. evidence, along with impartial judges, non-overzealous prosecutors we will only execute guilty subjects if we have to execute anyone. I sure wish you, I or ANYONE with a loaded piece at the ready had been confronted by a Zodiac, B.T.K., Green River, Dahmer, Gacy et al and been able to stop their rampages cold. Maybe there is something to be said for concealed carry if that could have happened! - ydahS'O ;-)

P.S. - Any luck with the links? Could it be your template doesn't easily handle them; maybe switching to a template that features that link column from the outset?

this crap of trying to convince all you anti-dealth penalty folks everytime a sentenced criminal has to pay is beyond doable. my advice is to volunteer for all capitor offense trials jury duty and see all the evidence in each case and THEN you can have an opinion worth anything.

But even twelve jurors get it wrong sometimes... for all kinds of reasons...

I hope none of US has to be on either side of this issue for the rest of our days!

Tookie was a great start, now can we kill the rest those shitheads on death row?

Life in prison, in solitary confinement is the only answer.